A sip of music: A review of concerts in the Southern California area 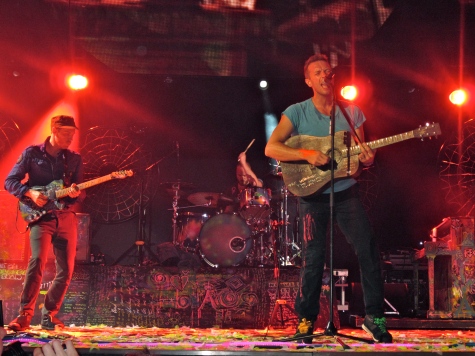 KROQ’s annual concert, Weenie Roast Y Fiesta, had an amazing lineup this year including: Coldplay, Incubus, The Offspring, The Dirty Heads, Silversun Pickups, Pennywise, AWOLNATION, Grouplove, Of Monsters and Men and Walk the Moon.  It was hands down one of the best concerts I have ever been to.  Besides the talented bands that composed the lineup, one of the reasons this concert was so memorable is because I was stage front.  Standing only a few feet away from Coldplay frontman, Chris Martin, while the audience sings along “look at the stars, look how they shine for you” was truly magical.  In the pit you are engulfed in the excitement of the audience and can feel the energy from the band. It is as if you are performing along side these talented musicians… like you are a part of the concert. I think concerts can motivate the laziest of people. It is inspiring to watch musicians because the passion they have for their music becomes very evident and is almost contagious.  Not to say that I’m inspired to pick up a guitar and start a band of my own after every concert I attend (although, it is embarrassing to admit, that is one of my hidden dreams).  Music can inspire people to follow their dreams and to watch musicians pursue their passion nspires the emersion of other people’s passions.

My favorite performance of the entire concert was Coldplay’s cover of the Beastie Boys song “(You Gotta) Fight for your Right (to Party)”.  This song was not only memorable but also emotional because one of the members from the Beastie Boys, MCA, died of cancer just two days earlier.  The song opened in the darkness with Chris Martin on the piano.  When the lyrics began the mood of the audience changed from excited to pure admiration.  The crowd shouted along to the chorus “you gotta fight for your right to party” in memory of MCA; in celebration of a great musician.  The tribute brought tears to many eyes in the audience, including my own.  The performance was more touching and commemorating than any eulogy I’ve ever heard.  Music has the ability to express emotion where words fail.  A good concert has the ability to inspire passion and provoke emotions.  Weenie Roast 2012 was definitely a life changing concert.

San Diego is famous for it’s beautiful beaches, sunny weather and laid back atmosphere.  In my opinion, there is only one genre of music that perfectly mirrors the vibes of San Diego: Reggae.The upbeat but laid back vibe that is intertwined through the beats of reggae music compliment the vibes that come from the oceans of San Diego. It is no wonder that the SoCal Reggae Fest was hosted at the Valley View Casino Center in San Diego on Saturday April 28th.  This concert was a reggae fanatic’s dream with headliners like San Diego born Tribal Seeds, Tomorrows Bad Seeds, Through the Roots and Fortunate Youth.

The concert displayed a beautiful blend of feel good music that echoed through out the huge venue.  As I looked behind me through the crowd I realized how big the auditorium was compared to the audience.  The audience only took up about 1/4 of the venue.  This is a drastic difference compared to the electronic festival (LED Anniversary) I attended at the same venue a few months earlier.  At LED the floor was completely packed with people and the bleachers were full as well.  In a city that breeds reggae music, I found the difference in the size of audience between the two genres astonishing.  It demonstrates the debate between live music and electronic music mentioned in my previous post.

While I was watching Tribal Seeds perform “The Garden”, one of my favorite songs by them, the difference between electronic music and live music hit me.  It is not only the artist that impacts the size of the crowd and the popularity of a concert, but also the make up of the crowd itself.  There is no question the reggae bands that performed at SoCal Reggae Fest are talented musicians.  However, young audiences go to concerts not only to appreciate the music but also for the experience itself, the party.  The dancing and interaction that occurs in a crowd at an EDM concert is much different than the smoking and “chilling” that occurs in the audience of a reggae show. The audience at the reggae festival was actually watching the bands perform, whereas the audience at LED Anniversary was at the concert to be social, and ultimately, to party.

Personally, I enjoy listening to reggae because it brings me a feeling of peace and happiness while the melody often takes me on a 4 minute vacation.  On the other hand, I also enjoy the dancing and energy that comes from an EDM show.  After attending the SoCal Reggae Fest I realized that it is not necessarily the demographics that determine the popularity of different concerts, but rather, what is popular for the times.  Despite the popularity of reggae in San Diego, the electronic scene is a newer and more exhilarating experience for young concert goers.

Technologic: A debate about live music

German trance DJ Andre Tanneberger, famously known as ATB, performed a beautiful blend of electronic sounds at FLUXX nightclub last Thursday evening.  The crowd went crazy when ATB first appeared on his DJ platform and one of my friends yelled “I can’t believe I’m finally seeing ATB play live.”  For some reason this statement struck me as somewhat odd.  As much as I love dance music and respect the DJs who electronically produce music, I have never considered a DJ live music.  With the growing popularity of EDM it seems as though the definition of live music is changing.  A few decades ago, a band playing instruments and singing in front of an audience was considered live music.  In modern society a musician pressing buttons and twisting knobs on his computer is considered live music.

The main task for a good “live” DJ is to read the audience and play songs that feed the crowd’s energy.  However, just as the idea of “live music” has transformed, so has the job of a DJ.  Instead of simply remixing songs like Disc Jockeys did in the 80’s, DJ’s now produce their own music.  The laptop has become a musical instrument.  It makes me wonder if individuals thought that the emergence of other musical instruments like the guitar or piano undermined the vocal talent of musicians because those instruments are sound producing technology much like the instruments used for electronic music.

Despite this idea, it is still difficult for me to grasp the performance of a DJ as live music mainly because the music that is played during his or her performance is already produced.  Although songs in other genres are already written before a live performance, there is something amazing about a group of people, or even an individual, simultaneously playing musical instruments and singing to create a harmonic collaboration of sounds for a live audience. The quality of the live  performance of a DJ often depends upon other elements besides the music including the LED light display, the DJ’s choice of songs and the energy of the DJ.  The quality of a live band depends solely upon one thing: the music.  And let’s face it, the music is the only thing that should truly matter during a live performance.

Last weekend I witnessed the resurrection of rapper Tupac Shakur.  The Coachella Valley Music and Arts festival astonished the audience during the performance of Snoop Dogg and Dr Dre when an image of Tupac was projected on stage.  Although this image was a mere hologram, it seemed as though Tupac had come back from the dead to give the Coachella audience one last amazing performance.  The moment he appeared on stage it was as if the rapper had never died at all, like the audience jumped into a time machine back to the 90’s before he had been murdered .  One rap music fanatic in the audience described the experience as being “a spiritual moment that he will never forget”.

The technology used to create the hologram is not very revolutionary, however, the idea of projecting images of the dead to perform for large audiences is somewhat controversial.  Soon, we may be able to attend a concert and see an image of Beethoven perform Moonlight Sonata, watch Jimmy Hendrix grind guitar riffs of Purple Haze or dance along with Michael Jackson’s Thriller during a “live” performance.  Although these kind of concerts would make iconic musicians even more immortal than they already are, there is a moral question at hand.  As much as I would love to see a lifelike image of John Lennon perform Imagine or Bob Marley sing Three Little Birds, it is unethical for companies to profit from the dead. Furthermore, this would give certain companies the right to deceased musician’s images. While it is easy to see holographic concerts become a new musical craze, it seems like a gimmick to attract consumer’s money.  The legacy of past musicians should be remembered through their music not turned into a commodity by the wealth hungry music industry.